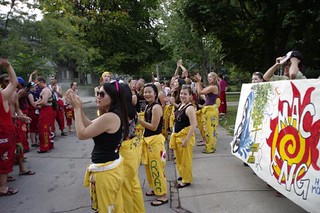 McMaster held its annual pajama parade of first-year students on Wednesday, September 5th.  Leaving campus at the Forsythe entrance, they went east on Sterling, turned left onto Dalewod Crescent to Paisley Avenue North, right onto Dromore Crescent, and then back along Sterling to the campus.  A band led the way followed by groups each wearing its faculty’s colours and led by upper-year students.  More upper-year students from each faculty were stationed at different points along the way to welcome the students and high-five them.  Al Legault, an employee of the McMaster Students Union who has run this event for the last three years, did an excellent job!  It ran like clockwork with incredibly well-behaved kids. There was enough police presence to keep them in control, but it wasn’t over the top.

The students all seemed to really enjoy themselves, and the neighbours who came out to watch also seemed to have fun, especially at Dromore and Paisley. Twyla Hendry and Brian McCarry opened their pool at that corner for the upper-year students to have a dip while they were waiting for the parade to begin, and then again after the parade was finished (about 6:35 p.m.).  One neighbour brought her sprinkler out to the middle of the road to cool off the students stationed on Paisley.  Then the music broke out at Dromore and Paisley, and for about 20-25 minutes there was some cool line dancing. They were wonderful to watch and very well behaved. Perhaps next year more of our permanent residents would like to attend, as I think these neighbours not only will continue with this idea but perhaps also have a hot dog roast for the upper-year volunteers. I’d like to personally thank Al Legault for once again running such a tight ship!

This entry was posted in News/Articles. Bookmark the permalink.